“If it isn’t broke, don’t fix it” – that’s a statement that I’ve heard used by individuals and companies alike when it comes to their IT equipment. Many of us believe that as long as the PC is working there is no need for any kind of maintenance, but this is a terrible approach and I’ll show you why. Let’s look at a heat sink for a CPU before and after servicing. 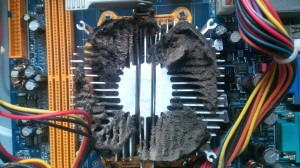 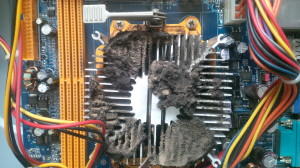 Both pictures above are taken of the same heat sink with the fan removed. Without the fan removed you wouldn’t see exactly how bad it is and you might think it’s not so bad. 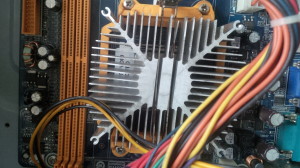 While most users won’t see the insides of their PC some signs that servicing is required may include the system becoming noisy, slowing down, hanging up or shutting down during usage. Unfortunately most of these signs – especially the latter ones – don’t show up until the system is in dire need of servicing and some parts may have already been damaged as a result of the lack of care.

WHAT COULD POSSIBLY GO WRONG?

Well for one thing an excessive amount of dust/dirt is associated with static buildup. This means that there’s a chance of electronic parts dying due to static all because of a little dirt.

Another thing which most persons don’t realize is that dust and dirt in your PC will cause rust. Sounds unbelievable right? But this can be seen in a close-up of the AFTER picture above of the heat sink. Though it was cleaned it still has rust on some sections.

Static will literally kill PC parts and rust will cause extensive damage as it spreads. The really bad part is that when rusted areas on your circuits are covered by dust, cleaning can actually do more harm than good. Why? Because the dust and dirt get attached  to the rusted area, cause breaks in the circuitry, and then once cleaned the parts stop working because of all the breaks in the circuitry. This is one reason why some technicians will refuse to work on units that are either very old and/or dirty.

HOW TO PREVENT THIS?

So how to you clean your PC and keep it clean? You have two options:

First, if you’re comfortable with opening up the case, do so and blow it out periodically with compressed air.

Simply remove the side panel of the PC and blow it out using the compressed air. Even if you’re not comfortable with removing the fan to do a thorough blowout, a basic blowout will still keep the dust under some kind of control until you can get it done thoroughly.

Your next option  – and the recommended one – is to take the PC to a repair shop or call in a professional individual to have the PC serviced since – as mentioned before, some parts will require disassembly and cleaning versus just blowing out. 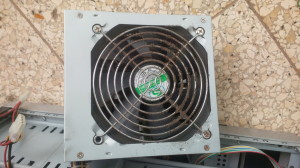 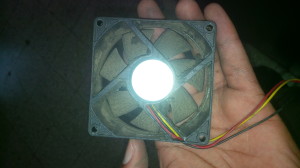 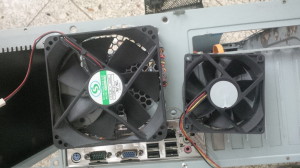 HOW OFTEN SHOULD I DO THIS?

I can’t answer this question definitively as each situation is different. I would say however, that everyone should have their PC cleaned professionally at a BARE MINIMUM of twice per year.

Having your PC checked periodically will not only prolong the life of the unit by keeping it clean, it will also help with preventative maintenance since your technician might be able to see potential failures so you can nip them in the bud.

WHAT SHOULD I EXPECT PROFESSIONALLY?

Please bear in mind that professional service costs may vary depending on the degree of work expected. Basic servicing will be cheaper than detailed servicing for example. Other servicing such as virus removal, software configuration or networking may be at an additional cost.

Hopefully the information provided has shown you just how important it is to have your device serviced. Even if you don’t want to do it yourself at least try and get it done every now and again. It’s definitely cheaper than having to buy all new parts.

So I needed to find a way to repair the USB port on my Z10. I had  purchased it used with issues on the port – the previous owner dropped it a lot and the port got damaged – wouldn’t charge properly. So I purchased some ports off eBay and did two things:

As it turns out this dude called ABUBABLU did some good repair work on a Z10 before and provided solder points for USB, battery and SIM slot on the Z10. I give all credit to this guy because he’s a very good electronics tech from the other stuff he posted – unfortunately he doesn’t answer back as I’ve emailed him on this issue.

All of the points check out except for one – his schematic diagram has the #4 USB pin as the CRADLE_USB_ID which is what (I guess) starts the USB connection – exists on my model. There may be a difference in the STL100-1/2/3 boards. There is a solder point near the SD card slot on the phone that does not exist on my model – on mine there’s just a row of capacitors (I think they’re caps – so small…..) and I can’t find where that pin should go.

The original posts I found on GSMARENA and others can be found on another site.

I had to run all the lines using IDE cables because all the solder points on the board for the USB port were torn off during removal – they were just that badly damaged (and I don’t have a rework station……) – The phone now charges with no issues, works occasionally – going to check and see if I can fix that permanently.

I’m not sure which model ABUBABLU took his information from, but my model is different. Here are pics of the ports as I’ve tested and mapped. Most of them are exactly the same as his except one. Hope this helps others with the endeavor. Mine doesn’t work so well due to the fact that I thought the connection went to a capacitor where his was in the picture. His pictures were also low quality so I couldn’t see it well. It was after some checking that I finally found out the models were different and the points not the same. I probably screwed up something, but it happens to help out others. Hopefully someone else will get their things fixed and not go through this issue.  All credits for the original information go to ABUBABLU – kudos.

Picture of full board (WARNING! picture is 10MB) 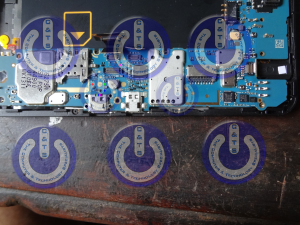 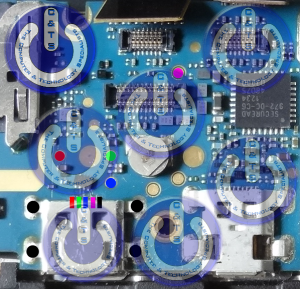 Hi to all our clients, potential clients and visitors! This is the official blog for C&TS – The Computer & Technology Specialists in Mandeville/Jamaica. Here we will be posting information on various fixes and links to tech information that you may find helpful, useful, informative or all of the above. Keep checking back for updates and thanks for stopping by!