Some persons may remember in 2013 that Winamp had shut down.

Since then the days of easily, quickly (and freely) skinning your audio player went out the window. Personally I never used Winamp to organize music – just play, but it did have some very nice features. I even had some skins that exactly matched my wallpapers or fit into certain sections of the screen.

While some functions in Winamp are replaced by functions in your OS, there are persons that would still love to go back to their familiar player that had excellent functions. On that note I have good news: Winamp seems to be making a comeback.

The new site looks good but they are working on it. Things moved quickly and while this may be old news it’s not known by some. So – here is a quote from Wikipedia.

On November 20, 2013, AOL announced that on December 20, 2013, it would shut down Winamp.com, and the software would no longer be available for download, nor supported by the company after that date. The following day, an unofficial report surfaced that Microsoft was in talks with AOL to acquire Nullsoft. Despite AOL’s announcement, the Winamp site was not shut down as planned, and on January 14, 2014, it was officially announced that Belgian online radio aggregator Radionomy had bought the Nullsoft brand, which includes Winamp and Shoutcast. No financial details were publicly announced.However, TechCrunch has reported that the sale of Winamp and Shoutcast is worth between $5 and $10 million, with AOL taking a 12% stake (a financial, not strategic, investment) in Radionomy in the process.

The program is still being worked on, but you can still get their application to download from within their forums.

Personally I’m looking forward to the finished product, but so far it brings me back to a time when music was easier to play – playlists were easier to manage and skinning my player was a piece of cake.

As we said before Origin was giving away the game for free. It’s back up again and seems much more stable now. Have fun!

As we said before the game is available for free on Origin. The problem is that EVERYONE knew about it and stormed it. Was difficult to get a download going. 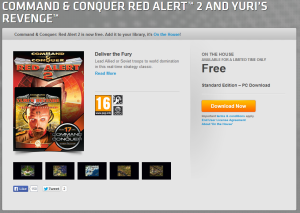 Due to this they had to take it down. They said it’ll be back soon but they realize that the demand for that game is much higher than they thought. 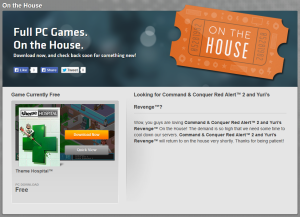 Quote from the site:

Earlier today one of our friends alerted us to this deal. Check it out while it lasts!